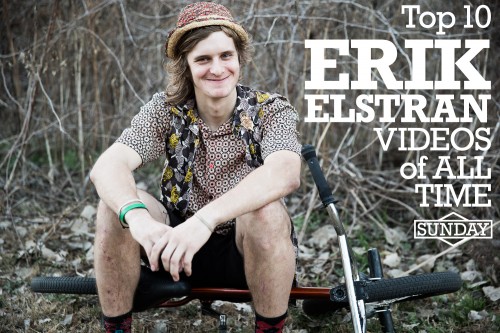 To celebrate Erik Elstran joining the Sunday Pro Team, we decided to make a top 10 list of our favorite Elstran videos. Be prepared to spend some time here because there’s so much good riding in this list. You might have a different opinion on the order, so leave your ranking in the comment section below. Enjoy!

Not sure why he has a harmonica taped to his bars, but oh well. The clip at 1:12 caught me off guard, enough to the point that I thought he was dead. Of course not, it’s Erik.

This is the first of 3 Osiris videos that made the list. Erik proceeds to ride his home skatepark in socks and hang 5 from one end to the other and back. Watch for the handlebar grinds while sort of laying down.

This is the first video that put Erik on the radar of so many people. The trampoline sequence at the end will always be refreshing.

The Minnesota winters are more harsh than most people can handle. It doesn’t stop Erik from killin’ it mid winter. X-up footjam nosepicks are hardly done today. He did them so long ago.

It was a good day when this video dropped, how could it not be? Erik joined the Sunday team and we couldn’t be any more stoked. The Natas inspired pedal spins at the end are almost impossible to do and he fires out multiple variations. This ended up being shown in the Kalamazoo Film Festival.

You probably don’t know that Erik went to film school which might explain this video. This was so popular that it ended up in a few film festivals. He’s always described as one of the most highly creative bike riders in BMX.

This is the last of Erik’s Osiris videos on our list. Seriously how many good tricks are in here? Almost every clip is awesome. He actually does frontside crankslides and has control over it. This video has one of the first documented cases of a double kinked handrail being crankslided.

2. Team Dilly is the Man part

When his section from Team Dilly is the Man was released on line, it blew minds in and out of BMX. You don’t have to be a hardcore BMXer to appreciate Erik’s riding which would explain why this video received over 150,000 views in less than 24 hours.

We could be a little biased on picking this one for the top Erik Elstran video, but come on that last trick is straight out of the future. He could’ve easily rode down the thing making it still awesome, but no he has to nose manual down. Oh wait, there’s more, not only do you get a nose manual down, but you get a 360 out. It’s like a trick from 2016 done in 2013. This video takes top pick because it incorporates his first video with 2013 riding.