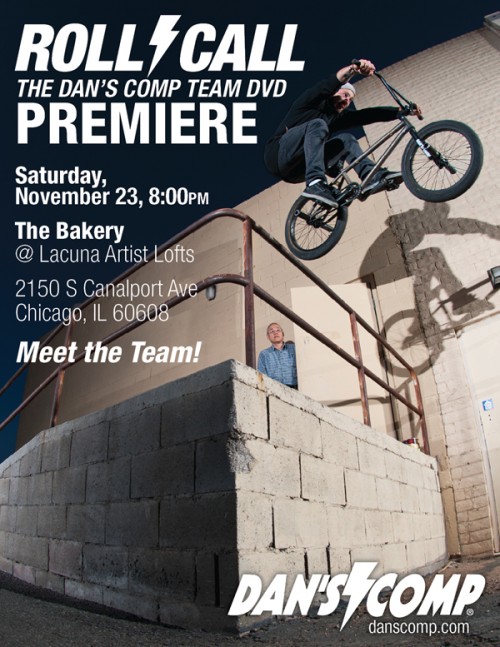 Alex Magallan has a big part in the upcoming ‘Roll Call’ video from Dan’s Comp which premieres Saturday November 23rd at The Bakery in Chicago! Get ready because this is going to be awesome.  So, if you’re in Chicago then be sure to check it out.  You’ll get to meet the whole Dan’s team as well.
END_OF_DOCUMENT_TOKEN_TO_BE_REPLACED

Alex Magallan has been killing it lately.  Besides having the ender move in the Sunday Goes to New England video, he just scored the Dan’s Comp catalog cover and Ride BMX ad.  Check out the Ride ad and Alex’s Welcome to Dan’s Pro Team video after the break.

END_OF_DOCUMENT_TOKEN_TO_BE_REPLACED

Welcome to the Dan’s Comp Pro Team Alex Magallan!  Here is his welcome edit and it does not disappoint!  Alex always has great style and trick selection.  One of the best things is how fast he rides.  His last trick is a beast!

Alex Magallan is known for high speed manual lines, gaps to walls and just about everything else most people wouldn’t expect, but barspins aren’t one of them.  Check out a morning with Alex and his Dan’s Comp teammates while he was “learning” barspins.  Here is Alex’s signature EX complete bike if you’re into going fast and smooth after the break.

END_OF_DOCUMENT_TOKEN_TO_BE_REPLACED

Alex Magallan has some very Alex style moves in this latest video from Dan’s Comp.  He blasts some 5 Hip ditch lines at his usual high rate of speed.  Tons of good moves from everyone in this video.

That’s right you can win all the Sunday parts that Alex Magallan has on his bike by going over to Dan’s Comp!  You’ll have a chance to win a Black Magic Forecaster frame, chrome Tall T bars, chrome Morning 2.1 forks, Freeze stem, Sabretooth sprocket and Slim seat clamp. You’ll also win some shirts from the 2012 Spring Tshirt line, foam fingers and even some Ipath shoes.  Just follow this LINK and enter. Good luck!

Alex Magallan has officially joined the Ipath footwear team.  The team was announced today, so go check out their site to see the shoes and the very stacked team that he has joined.  Seems like everything is going well for Alex.  He recently joined the Dan’s Comp team, had an amazing Props Owned section and got the cover of the newest Ride BMX issue.  Congrats Alex!

END_OF_DOCUMENT_TOKEN_TO_BE_REPLACED

Alex Magallan got added to the Dan’s Comp flow team recently, so they put some photos up of his Forecaster bike along with a bio on their site right HERE.  Notice the Collegiate hat next to Alex, we have new spring colors coming next month, so get ready.

Alex Magallan comes through with the toboggan fakie on his Forecaster while Derek Derose snaps the photo.  Good combination if you ask me.  Did you see that Alex got added to the Dan’s Comp flow team?  Well he did, so congrats to him.

Props Owned which features Alex Magallan’s latest video part is now available at Dan’s Comp.  I’ve seen his part and it is pure Alex.  Super fast with tons of great lines that most people wouldn’t see.  Definitely worth it.