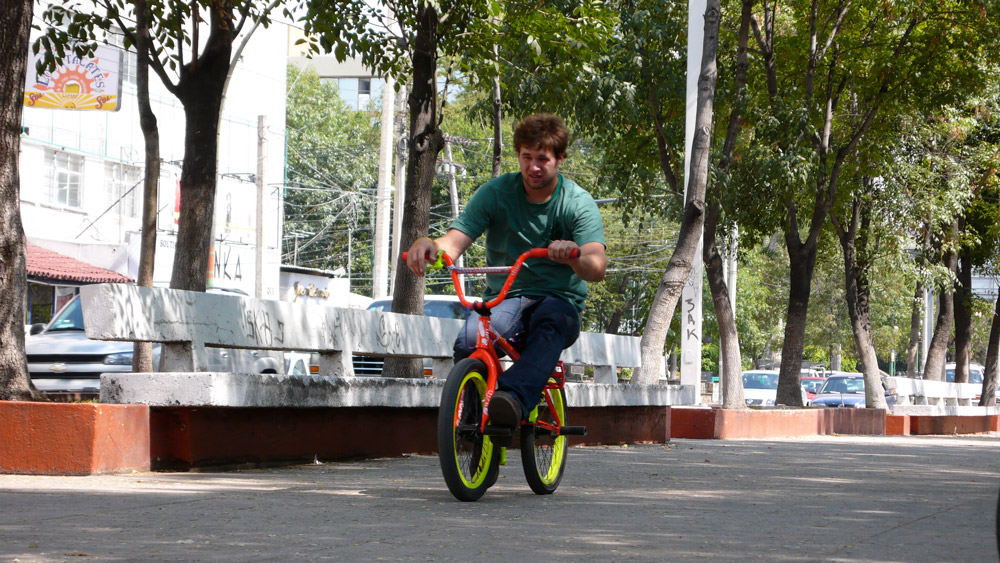 Now that Up, Up and Away is available in most of North America, I wanted to show some photos from our Guadalajara Mexico filming trip last June. Aaron Ross, Jake Seeley, Ian Schwartz, Kurt Rasmusson and myself all went down there to film!  It was such a fun trip to Mexico, all the guys rode well and we met so many super nice people. I had no clue what this far south in Mexico would be like and it was amazing. Driving was a little rough, but once you realized you could basically just do whatever you wanted then everything was fine.  Check out the gallery, it’s what I could get when my nerves weren’t frazzled from driving!

Well, its 2009 and I decided to gather up some unused footage from last year. The story behind this is after we did a demo in Guadalajara Mexico, Jake Seeley spent about 10 minutes riding this inadvertent manual pad. Nothing too serious, but he fired off a bunch of tricks real quick and easy. The kids gathered around to watch then Jake almost hit an old man on crutches walking through the crowd. I still don’t know how he actually made it through everyone though.  The vibe was great in Mexico, we had a lot of fun and I believe the kids did too!  More videos soon!

Did you guys check out these Chad Shack produced videos on Defgrip? Picking Brains is just that, a few of us talking about Guadalajara Mexico which was a totally new place to us. We wanted to show that we went there for more than just the bike riding.

This next one also on Defgrip is a sort of mini group discussion by Jim Cielencki and Jake Seeley. We talk about the official it trick of the last year the Luc-e grind. I’ve been into that trick for a long time, so it was really good to talk with someone who is just as excited about it as I am.

Aaron Ross had to fight some serious traffic that would make any normal human being insane. He didn’t quite get what he wanted, but it was awesome none the less. END_OF_DOCUMENT_TOKEN_TO_BE_REPLACED

Hey a few of us are down in Guadalajara Mexico filming for the Sunday video. Ian Schwartz, Jake Seeley, Aaron Ross and myself are down here. Check out thecomeup for constant photo updates and be on the look for some interesting web articles too. I’ll let you know more as we get them done. Also, RSVP now for the rooftop party we are having Saturday night.